As a model experiment for establishing real time PCR in our lab, we examined the expression of emerin in insulin-producing cells. Following stimulation with various glucose concentrations, RNA was isolated, cDNA was synthesised and real time PCR for emerin was carried out using Roche QPCR mix Plus and the Biorad Opticon 2 system, a plate based cycler. All reactions were performed in triplicate. The results are shown below. Each group of bars represents different cell isolations and each bar in each group represents increasing concentrations of glucose. The error bars reflect the variation within the triplicates. 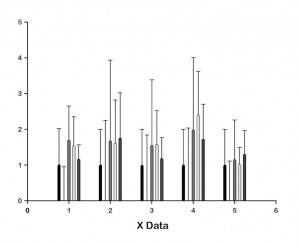 These results were clearly not suitable for the analysis, due to the large variation in the generic triplicates from each sample. To exclude the possibility of errors in pipetting etc, we next decided to examine the variation in samples aliquoted from the same reagent batch. Samples were placed in multiple positions in the cycler:

To our surprise, the variation was still immense: in excess of 5% across the plate (CT varied from 21,5 to 22.7 cycles). 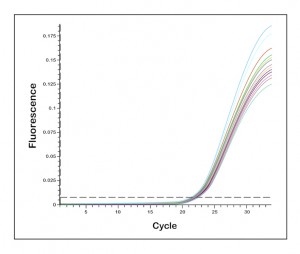 In this experiment a two-fold variation in the amount of the specific target cDNA would therefore not have been detectable. We repeated the experiment over several days (below) and observed that there was a clear co-variation from day to day depending on the plate positions. Thus, some wells gave consistently low results while other wells gave consistently higher results. This means that the temperature is not uniform across the plate. We repeated the test on different cyclers of the same model and obtained similar results. This led us to conclude that our disturbing results were not caused by a faulty cycler, but by an inadequate design of the equipment. 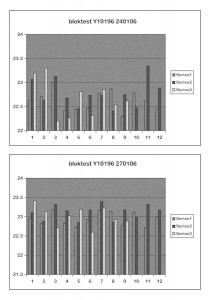 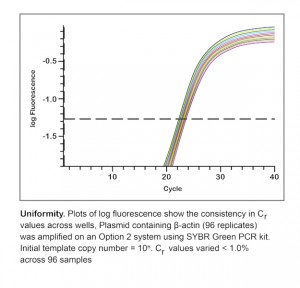 In spite of several visits from the company’s technical staff, we never managed to get the cycler to perform better than described. Another instrument in our hospital had already been returned to and refunded by the company for the same reason. We next turned to an air-based cycler (Roche Lightcycler ver 1.5). This apparatus is quite different in construction (see Thermal cyclers). When running the same samples in the Lightcycler, we observed much smaller variance, typically 0.01-0.03 cycle (still at Ct=20 cycles). An example is shown below. In this particular run five identical samples gave a Ct of 23.17 / 23.17 / 23.19 / 23.17 and 23.17. 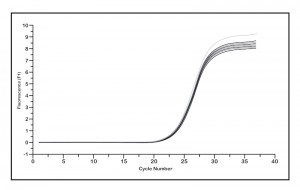 The Lightcycler is considered completely outdated today. It is nevertheless one of the best cyclers ever made, and still performing better than most modern cyclers. They are available at a very low price (USD 500) second hand, representing an immense saving compared to buying modern and new instruments.